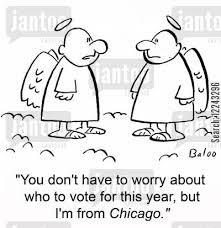 On the left is a funny cartoon about voter fraud, because of "dead voters" voting. (Baloo. 2012. www.jantoo.com. Web.)

There is still voter fraud today, and political corruption is more prevalent than ever. Even the force pledged to stop these things from happening has its own set of problems. In fact, since 2000, 47 Chicago law enforcement officers were convicted of drug and gang related crimes. (University of Chicago, Anti-Corruption Report #7, 2013)
Police Misconduct in 2009:

The following is data collected from April through September of 2009 (a period of 6 months) in the US.

Although police misconduct is not reflective of police corruption, it gives a good idea of what the police force is like.

This was taken from the 2009 Semi-annual Police Misconduct Statistics Report, assembled by David Packman.