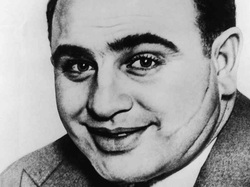 Al Capone had a dramatic influence on society in the 1900's. Power was slowly creeping away from the authorities, and more and more to Al Capone. In fact, gangs and criminal leaders ruled Chicago and totally changed the political dynamics of the city forever.

One of these gangsters was named "Diamond Joe". He started something called the Pineapple Primary (where mobsters bombed the voting booths with "pineapples" [grenades] so that people couldn't vote). He was backing up a politician named Deneen get into office for Chicago Mayor. (Hood, Al Capone, 'Big Bill' Thomson Shown Together in Photo)

However, another gangster (supposedly Al Capone) was pulling the strings on a man named "Big Bill" Thomson. Thomson, by promising benefits such as lifting prohibition got $100,000 from Al Capone in campaign contributions. (McClelland, 2012, The Most Corrupt Public Official in Illinois History: William Hale Thomson)) By assassinating "Diamond Joe" and bombing Deneen's house, Thomson became guaranteed to win the election. This series of events demonstrates how the power was no longer in the hands of the politicians, but in the hands of the gangs. (Whitten, The Pineapple Primary)